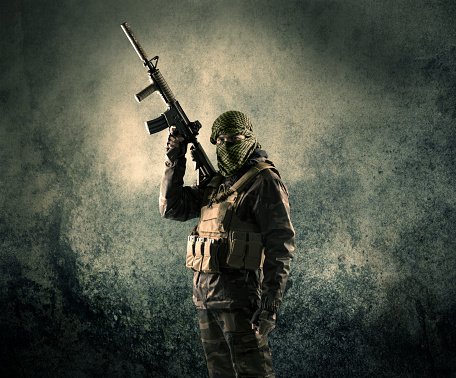 Millions of innocent people have lost their lives but the thirst for human blood has not been quenched so far.

Since independence India has been facing the problem of terrorism in different parts of the country, becoming a world wide phenomena.Terrorism means an organised way of armed violent movement directed towards government as well as non- government targets involving attacks with arms and explosives against civilians.

Political necessities, political frustration, personal political interests are some of the main causes of terrorism. Terrorism indulge in looting, murder, kidnapping, shooting and other unlawful activities to serve their very purpose of creating instabilities in other countries or to deter the innocents so that they either support them or don’t support the legal government machinery.

India has faced terrorism of ephemeral nature, which arises suddenly due to religious anger against either the government or the majority Hindu community or both.

These economic grievances of social injustice have given rise to ideological terrorist groups such as Maoist groups operating under different names.

For example- failure of the government to control illegal immigration of Muslims from Bangladesh.

There have been an acts of religious terrorism, this can be due to the feelings of anger amongst sections of Muslims youth over the government’s perceived failure to safeguard their lives and interests or due to Pakistan’s attempts to cause religious conflicts.

The terrorism in India is mainly nurtured by external agencies especially Pakistan, in the bordering States of Kashmir and Punjab. Between 1989 and 1993, terrorism in Jammu and Kashmir was mainly due to the activities of indigenous Kashmiri organisations. The Pakistani jihandi organisations have been operating in Indian territory under the guise of Kashmiris since 1999 and have taken over the leadership of the anti India movement. There been number of terrorist incidents,- the explosions in Mumbai, the explosion in a Hindu religious place in Hyderabad.

India has not allowed the intimidatory violence of terrorism to come in the way of electoral process, the government of India believes that a well-functioning democracy, effective policies and good governance are the best antidotes to terrorism, refusing any kind of concessions to terrorists resorting to tactics like hijacking etc.

It is ironical that Pakistan, the epicentre of Global Terrorism is the greatest ally of USA fighting Global terrorism. The much talked about “Global war against terrorism” is one of the most cruel jokes of the present time.India has been drawing attention of the US and other countries to the atrocities committed by the terrorists, but of no avail.

Rightly said by someone, “Only the wearer knows where the shoe pinches”, USA realized the danger only when terrorists stuck at its heart on 11th September, 2001 when twin towers of “World Trade Centre” New York were reduced to debris by suicide squads of terrorists. USA feared that its fortress was also not impregnable, USA that boasted of its Super power status, Military and intelligence, suddenly forced to realize its vulnerability.

The removal of Osamabin Laden from Afghanistan has not eliminated the threat of terrorists attack on USA. the Military might be world’s most intelligence agency fail to eliminate the fear from general American’s mind, the people even today are living under the long shadow of fear.

The US ambassador to India has time and again asserted that Global Terrorism will not end until the problem of Trans border Terrorism across India’s borders is tackled. Every person entering USA is being frisked by the authorities by the authorities properly, but is that all cover the insecurity prevailed among the minds of Americans?

The crux of the story is that the USA is having double standard in formulating its foreign policy to suit its interests and dealing with terrorism. In the name of destruction, US destroyed the Iraq and till date, not even a trace of Biological, Chemical or Nuclear weapons has found.

How can we expect that USA or Britain will feel the pinch of terrorist attack in India? India has to fight with its own with terrorism being encouraged by the neighboring countries. To look for support from either of them would be a folly. We have to tackle our problems, have to empower ourselves, just like any other country. terrorism has to be dealt firmly with determined efforts with the full and all out support of all political parties and every citizen.