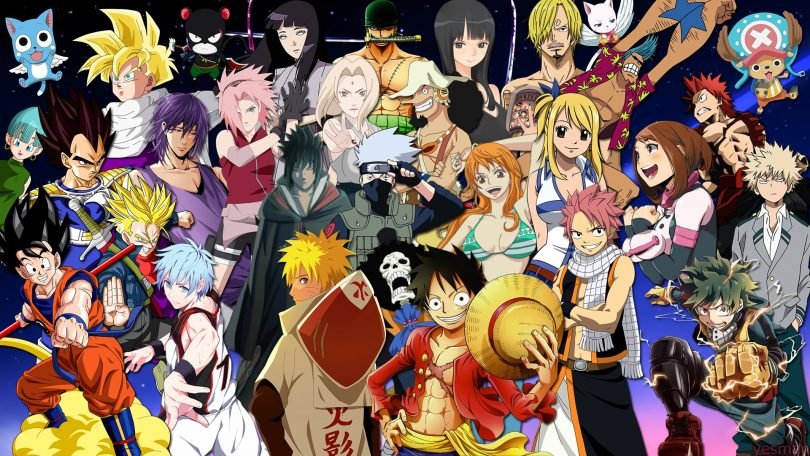 With its vibrant colours and creative imagination, anime is a complex genre of animation. Anime allows you to meet a wide range of characters and personalities. For a long time, anime has been extremely popular and influential. Two of the qualities that make them so popular are their distinctive method of delivering stories and amazing visuals. Although it’s almost tough to pick just one top character, there are a number of characters, and I have listed twenty of them below.

Itachi Uchiha is undoubtedly the most popular character in the Naruto series. His character is cool, calm, collected, and powerful, making everyone fall in love with him. The manner he has dealt with the harsh realities of life and the judgments he has taken are remarkable in unexpected ways. The character’s journey begins when he is four years old and witnesses a World War, which leads him to become a pacifist. Itachi possesses an unusual grief, a willingness to do the right thing, and a loyalty to the leaf village.

He is the show’s protagonist; he is well-suited to the limelight and love. Naruto, everybody’s favourite loudmouth ninja, can compete with practically any other anime character. He’s a rowdy personality who is both bothersome and kindhearted. He was a loner as a child, yet his fellow villagers hated him because of a secret past he didn’t know about. Naruto’s only ambition in life is to be Hokage, but completing ninja school is proving difficult. Despite the fact that he was loathed for being the Nine-Tailed Fox demon’s vessel, he decided to be good rather than evil.

Kakashi has a long and tumultuous history filled with tragedy, loss, and vengeance. Kakashi has a fantastic personality and knows how to manage situations. He was one of Naruto’s first teachers. Having his face mask on all of the time, this guy looks so awesome. He is also a wonderful character depending on his demeanour and appearance, that makes him nothing short of extraordinary. He’s gentle but tough, and he’s a formidable opponent.

Killua is a lovely boy who is Gon’s best friend from the start. Killua’s persona is appealing because he confronts his inner demons through the connections he forms in his life. However, it is quickly proven that he is far too powerful. He is the youngest son of the Zoldyck family, one of the most terrifying assassin families in the world.

The most well-known character in the Attack On Titan series is Levi Ackerman. Levi has a deep and fascinating past, and he is humanity’s most powerful but also the shortest. He rarely smiles and is unpleasant, impatient, and difficult to approach. A character who is steadfast, realistic, and empathic shows no fear, worry, or obvious weakness. His wit is dark, unpleasant, and obscene.

Shoto Todoroki is a wealthy, solemn, and well-intentioned young man. He is one of the most powerful and bright persons in his Class 1-A, but he has a tendency to be quite emotional. Shoto, who performs heroics in a hero outfit, has a wide range of features, including the ability to resist intense heat and a body temperature sensor that can cool or heat it to maintain it balanced. A personality who is initially misinterpreted. Todoroki, however, rapidly became a fan favourite, regardless of his initial impression.

He is one of the most well-known anime characters ever. He was also frequently spotted engaging in infantile pastimes and behaving in an immature manner. His demeanor and personality foster tolerance, tenacity, love, and an unwavering drive to succeed, making him difficult to dislike. In One Piece, anime fans anticipate his foolish and dumb demeanour. He has a positive impact on others around him and makes them smile. Monkey has always desired to be a pirate and have his own crew since he was a child.

The One Punch Man, Saitama, is unquestionably the most powerful character in anime. Unlike most other combat anime, the protagonist in this series is already the toughest person. He can endure any blow and defeat any foe with a single severe strike after three years of intensive training. Saitama is a deft and insightful hero who has a keen sense of what is going on around him.

Eren’s misery and suffering are undoubtedly among the worst in anime, and as a result, practically each Attack on Titan fan sympathizes with him. The fact that he can turn into a Titan himself was an amazing moment that only added to our admiration for Eren’s incredible power and resolve. He has the intellect, strength, will, and visuals needed to become the next major thing.

Mikasa Ackerman is one of the most famous and beloved female anime characters of all time. Mikasa Ackerman grew up in a difficult environment. Mikasa is a fearless fighter who tries everything she can to protect her dear ones from danger. Whenever it comes to fighting the humongous titans, she is a ferocious woman, but then when it comes to Eren, she is a soft-hearted girl.

Izuku Midoriya, the primary protagonist of My Hero Academia, is a joyful, messy-haired youngster with a life-long desire of being a hero who is dependable and affable. On another level, his dedication, hard work, and motivation to attain his goals despite the obstacles are motivating. Izuku is a modest man doing his hardest to follow in the footsteps of his idol, All Might, to become the next sign of peace.

Portagas is a two-faced one-piece character that successfully combines his humorous side with his devoted side, all while maintaining a calm demeanor. The character never backs down from a battle. In comparison to his younger brother, he is considerably more courteous and pragmatic. When he is in combat, he is cool, but when he’s around his brother, he exhibits his softer side. Their fire talents aid in combat, and he will not allow anyone to harm Monkey.

Light is a fantastic anime character from Death Note, a hugely popular anime. He is a gorgeous young man having light brown hair as well as brown eyes that are considered as being quite attractive. The finest part about viewing this series was seeing how Yagami had had enough of the world’s corruption. He desired the death of every evil guy in the world, such that the planet could only live with the good people. Because of his brilliant mind and use of the lethal Death Note, he can destroy anyone in any way he wants as long as he knows their complete name.

Sanji is not at all one of the most well-known anime characters of all time, but he’s also a favourite among One Piece fans. He’s a master of combat. No one, however, can match Sanji’s culinary skills. When you combine his flawless sense of style with his lethal kick-based weaponry, you get an anime hero who dons the coolest costumes and wears them while working.

Spike Spiegel is the main character of the Cowboy Bebop series, which forever revolutionized the animation industry. But it was Spike’s background as a criminal and a guy madly in love that drew the most attention. His love with Julia, and the tragic conclusion to that relationship, follows him throughout the series, revealing what really mattered to him.

Meliodas is the Demon King’s son, and he is strong and durable. Having immense strength, the ability to deflect any magic, command over hell’s flames, and cursed immortality. Meliodas is the most powerful and fiercest character in The Seven Deadly Sins, and possibly any anime series. Meliodas is known for his candour and complete lack of fear. He’s also obnoxious and enjoys telling jokes, but his deep sense of justice and eagerness to assist those in need stand out.

Zoro is one of One Piece’s main characters and is often regarded as the greatest partner character of all time. His macho and cocky demeanor, as well as his inspiring and encouraging lifestyle, are what make all of his viewers and readers adore him. Some of the best bouts in the whole One Piece series come from Zoro’s battles with whomever he selected.

Edward Elric, the protagonist of Fullmetal Alchemist Brotherhood, is the man who will demonstrate to you what a great protagonist is capable of. Edward is the most mature of the series’ protagonists. Edward is a small man with long golden braided hair that reaches his shoulders. He has far too much anguish for his age, and he cannot disregard others who are actually hurting.

Lelouch is without a doubt the smartest anime character. In the anime series Code Geass, Lelouch plays the main character. He is compassionate, likable, and entertaining. Lelouch is so powerful that only he can defeat him. Lelouch enjoys taking on difficulties and is frequently seen playing chess, despite his nobility and prominence.

This man is so amusing, and yet he will cope with any threat with the same amusing approach. However, if you irritate him, he may not even let you survive. He has a juvenile personality, such as a fixation with sweets, and has frequently demonstrated his inability to articulate feelings. Notwithstanding his odd characteristics, he is extremely personable and has always attempted to convey his wisdom to those around him.