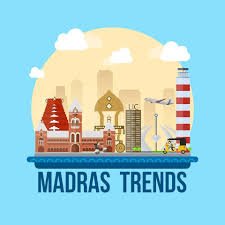 This is an short story of my emotions towards madras ……..

madras is know famously know as Chennai. The city is major attraction for peoples from all our India and overseas for his geographical location the mixed culture in the city. to describe the Chennai i can say it as “ INDIA ON A BOAT” because many peoples from other state and other district as staying in city in search of job, education and etc…… this city doesn’t fail to attract the locals and the outsiders staying in madras. you can born anywhere in the world but once you come inside Chennai you are come under the label ” MADRASI“……

what the specialty of “MADRAS” ?

The peoples favorite game is cricket and the franchise cricket team based on Chennai is ” CHENNAI SUPER KINGS” and leader of the team is “MSD” who is famously known as “Captain cool“. for the cricket followers the CSK is family and MSD is god for them. it is an main identity and specialty for the madras.

Rajini are Thaliva are popular title of him given by his fans and followers. is carrier path way is an motivation for the many youngsters who are following him. he as more than 40+years of experience in the film industry. The life from Bus conductor to Super star doesn’t com in an day he worked very hard to come this place in his life. he is best identity of Chennai which we are very happy to say when we describe our city.

The kodambakkam is known as film city of madras where the major Tamil film works are carried out. it’s an home for many big films production and peoples in the film business. the people staying in madras are more passionate towards the film. film as big impact on peoples life who are staying in madras. The MGR big CM of Tamil Nadu by impacting peoples through the movies and his dialogues in the movie have different meaning related to the life if peoples and there needs.

it din’t even take minutes in the morning for me to get into the majestic black gate of those tri coloured building so called as my school . but the same one hundred meter road appeared for us as the NH-47 road containing a one small but highly crowded toll gate as of bees over the comb . this toll was quiet different from the rest , it dint had a huge investment like other , and it was a toll containing 4 wheels . our ears waited for those annoying bell sound which was also pleasant at the dawn , not to rush home . just to rush to pay our toll fare , it wasnt an compulsion it was our emotion . the point of shearing and group enjoyment of all those school kids and teenagers started at those 4 wheels . to be more clear , it was also a period in our school life , which thought us only happiness.it doesnt matter whether , you are a state board , NCERT or even an international school alumni . if you are an madarasi this subject would have been an common course with one hundred percent positive results .

Marina Beach is the worlds 2rd largest beach and famous beach in Chennai which provides an lots of memories for the locals as well as guests of Chennai. The beach is clean and neat and this the place for elders to spend there morning time peacefully and happily. In beach you can do house ride, eat foods and spend your valuable time with your loved ones. theses the dream place for many lovers to spend there time happily.

one of the famous dance from India and his origin from Tamil Nadu is Bharatnadium its mainly done by ladies which is more attractive and they attract mainly by there expression is an identity of madras.

We have an unique culture of providing food to the guest in banana tree leaves with different variety of foods and we have belief that the guest are our god and we give equal importance to the both the guest and the god .

madras christian college is an pride of madras which is mainly teaching “Arts and Science” for there students. it was build by SCOT peoples in 1837 in the place called ” Tambaram”. its also an reason why Tamil Nadu is second in education in all over the India. many lower middle class and poor peoples step in to there next step because of this college.

Chennai is an metropolitan city with metro facility in it . metro is from Chennai central to st.thomous mount. traffic as reduced as the introduction of metro in an busy city like Chennai. it reduced the travelling time of the office workers and working peoples.

We have Air force station in Chennai near Tamararam is the big identity of Chennai to say with happiness when it comes to speacility of Chennai. its also an place where many training officers take their training to serve for the nation .

All through Chennai is developing in rapid speed but still it does n’t lost his old beauty which are created by British peoples . madras is still have lots of old building build in the British period . as we can say British ruled as but fact is British teaches as lots of things before leaving the country. they brought to India the first railway system , building architecture and etc.

VGP is the best theme park in Chennai which offers amusement water rides which is the main attraction of tourist . it is the best place spent your week ends with your family and friends.