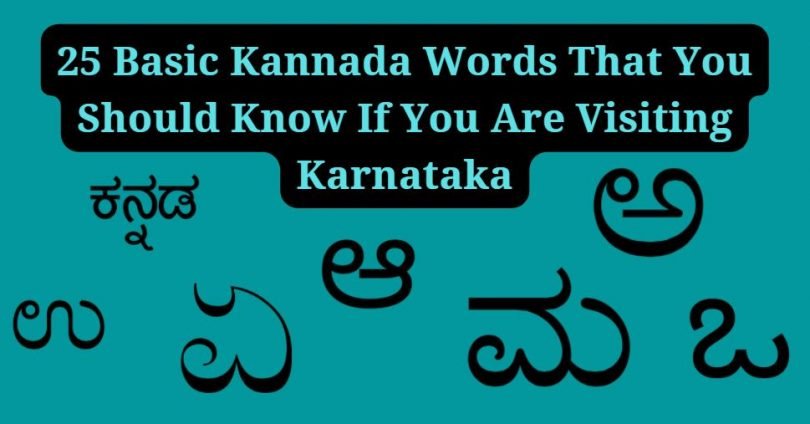 Kannada is an official language of Karnataka State and one of the oldest languages being used in the southern portion of India. As Bangalore is indeed a software companies hub with such a diverse culture, it is necessary to know Kannada in order to speak in the city and to understand certain basic terms that are useful in everyday life.

All of us have difficulties while relocating to a new city with a different language. Kannada might be hard to comprehend for individuals from some of the other parts of India. Therefore, learning a few common words to strike up a conversation with locals is usually a good idea. In this article, we have listed 25 basic Kannada words that you should know.

It basically implies “I do not know Kannada.” It will spare you from many awkward conversations in which the other guy rambles on for 10 minutes. Maybe your response is nothing to the expression you give when confronted with a difficult math issue. It is most likely the very first thing you’ll need to learn once you arrive in Karnataka.

Yelli/Yellinge means where. You can use this word if you find someplace and did not get it. Then if you ask, then someone will point you in the right direction.

This one is great when you need to go to the store. Local shops appear to have their own dialect. Simply point to the product and say “Kodu/Kodi” rather than standing there and struggling to say it in English. It just implies “give it,” then they will get it right away.

It’s the first day of school at your new school. Simply nudge a Kannada friend and inquire discreetly, Physics teacher yaaru? In this way, you can use yaaru if you want to know about the person.

Simply say “Yen/Yenu” if you don’t comprehend what someone is saying. It just means “what,” and it is not in any way unfriendly. Once you have learned many Kannada terms, you will want some time to get used to the dialect.

This is perhaps the simplest to grab. In Kannada, it’s “Hey bro, what’s up”, just say “Yen Guru Yen Samachar?”. This could assist in making new Kannada friends by demonstrating that you have made an attempt to speak their native language.

In Kannada, it implies ‘did you eat?’ It has the potential to greatly increase your social circle. It aids in the formation of lovely bonds.

This word means “How are you?” That is the most courteous of all Kannada basic phrases. This is something you can and should tell everybody.

In Kannada, it indicates “I am fine.” Its response comes after “How are you?” Simply say “Channagiddini” to indicate “I am Fine” in Kannada.

10. Naanu meter rate kodthini- I will pay by the meter

This statement, which is perhaps the most crucial on this Kannada terms list, will aid you in haggling with auto wallahs who demand for twice the real price. It implies “I will pay by the meter,” this will save you a little money as well as some awkward interactions with the auto wallah.

Hoggala means “Not going”. Simply say Hoggala when you want to skip a boring party.

This is a common Kannada language phrase that means “What’s your name?” You will utilize it on a regular basis. It’s also fairly easy to recall. It’s considerably simpler than trying to remember all names.

13. Shubha Dinavāgali- Have a good day

It literally means “Have a good day,” and to use it just at the end of every talk. This is another significant phrase in Kannada when it comes to sharing pleasantries.

In Kannada, Namaskara signifies Hello, as it does in most Indian languages. This is the easiest one.

If someone begins to lecture you on your own work, simply say “Baruthe” (I know) and leave. This Kannada word refers to that when people view you as if you don’t understand your work since you are an outsider.

This Kannada term, which means ‘Me,’ is helpful for people who want to get things done. Is your boss looking for someone to help out with a crucial task? “Naanu,” you can say.

If your flatmate asks who your best buddy in town is, tell him or her “ninu/nim/ni.” “You” is implied by each of these terms. Definitely, you will have their heart in no time.

In Kannada, Illa signifies “No”. Saying it is difficult enough. If someone forces you to buy something and you do not wish then simply say  “Illa” a few times.

If you are doing your office work and your friend calls you to go to a party then says the “kelsa” Kannada word for “work.”

This one is also important to know. This word really helps you a lot “Yeshtu” when discussing basic Kannada. It simply means “How much?” and will come in handy when dealing with local vegetable and fruit sellers.

“Do you speak English?” it means. It seems nice to ask someone if they know the language before we begin asking or discussing anything.

In Kannada, the word “baraa”, “Come” is what it really means. Simply say “Baraa” and point to it. If you want to tell your flatmate to finish your food if your stomach is full.

This word means “go.” You can advise your best friend to “go” to her classes rather than chilling at the cafeteria by using Hogu/Horadu.

If you have a workload then you might approach your Kannada boss for a deadline extension until Nalle? It does really imply “tomorrow.”

It simply means “more.” These phrases will enable you to communicate with shopkeepers, autowalas, and other individuals who really only speak one language or like to do so.