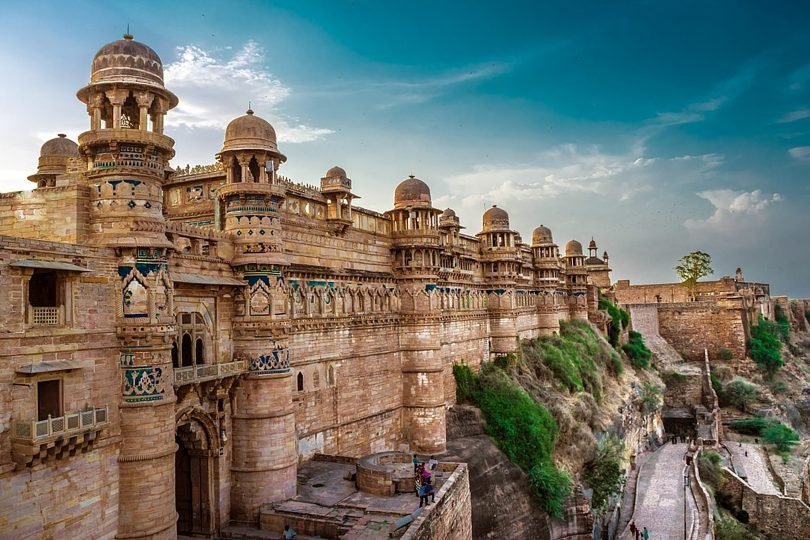 Gwalior has emerged as the most attractive city for tourists in Central India, Gwalior hosts most historic places like Fort, Museum, Ancient Temples, Monuments and many more. Gwalior was the Winter Capital of Madhya Pradesh State, which later became the larger part of Madhya Pradesh.

Raja Mann Singh Tomar was the ruler in the 13th century and later it was passed to Mughal Emperor in 1465 BC.High rocky hills surround the city from all the directions, on the north it  forms the border of the Ganga- Yamuna Drainage Basin.Gwalior holds major and special positions in the Indian classical music, art and literature.

Here Are The Top Places To Visit In Gwalior

Gwalior Fort  is a Fort on the hill in Gwalior, Madhya Pradesh, central India. The fort was live since the 10th century, and the inscriptions and monuments found within the fort. Now the fort campus indicates that it may have been constructed as early as the beginning of the 6th century. The fort was controlled by a number of different rulers in Ancient history. Mainly it was shown in the history that Raja Mann Singh Tomar was behind the construction of the fort in the 13th century.

Gopachal rock-cut Jain monuments, known as Gopachal Parvat Jain monuments, are a group of Jain Sculpt dated between 7th and 15th century. They are located around the walls of the Gwalior Fort, Madhya Pradesh. They Portray Tirthankaras in seated Padmasana posture as well as standing Kayot sarga posture, in the typical naked form of Jain Emblem.

There are a number of Jain rock shrines at Gwalior, with innumerable monumental statues, that are unmatched anywhere else. James Burgess writes: In the 15th century, during the reign of the Tomar Rajas, the Jains sees to have been snatch with an ungovernable impulse to convert the cliff that support the fort into a great shrine in honour of their religion, and in a few years dig the most substantial series of Jaina caves known to exist anywhere.

The Jai Vilas Mahal , also known as the Jai Vilas Palace, is a 19th century palace in Gwalior, India. which established in 1874 by Maharajadhiraj Shrimant Jayajirao Scindia Alijah Bahadur, the Maharaja of Gwalior. While the most part of the palace is now the Jivajirao Scindia Museum, opened to the public in 1964, still some parts of it’s the residence of his descendants, the former royal Maratha Scindia dynasty.

Unusual items fill many rooms like cut-glass furniture, stuffed tigers skins and a ladies swimming pool with its own boat. The immense dining room displays the piece of royalty, a model of silver train that carried after dinner brandy and cigars around the table, In divergence to the western style dining room, a completely Indian style dining room is also maintained, which was used when the Maratha nobles were invited.

Sun Temple also known as Surya Mandir.the Sun Temple is the most popular religious centre in the Gwalior city. Although not established  too long ago, the Sun Temple has turned out to be popular tourist attractions in the city from a long time now. Although it is one of the most admired shrines in the city now. Surya Mandir is also known for astonishing architecture. Dedicated to holy Sun God as the name suggests, the Sun Temple in Gwalior has been modelled with close similarities to legendary Sun Temple at Konark in Odisha. The temple has a breathtaking architecture and thus engages tourists and devotees from all over the country in large numbers.

Saasbahu Temple, also called the Sas-Bahu Mandir. This temple is mainly dedicated to Lord Vishnu in his Padmanabha form. It was built in 1093 by Maharaj Mahipala of the Kachchhapaghata dynasty, according to an engraving found in the larger of the twin temples. This temple mainly has 3 entrances from three different ways. In the fourth direction, there is a room which is currently locked. The entire temple is enclosed with carvings, especially four idols of Brahma, Vishnu and Saraswati above its entrance door. These carvings are Vaishnavism, Shaivism and Shaktism. The larger temple adornment envelopes all the exterior walls and all live interior surfaces.

“Come Visit To Gwalior And Let Yourself Fly With Us”.