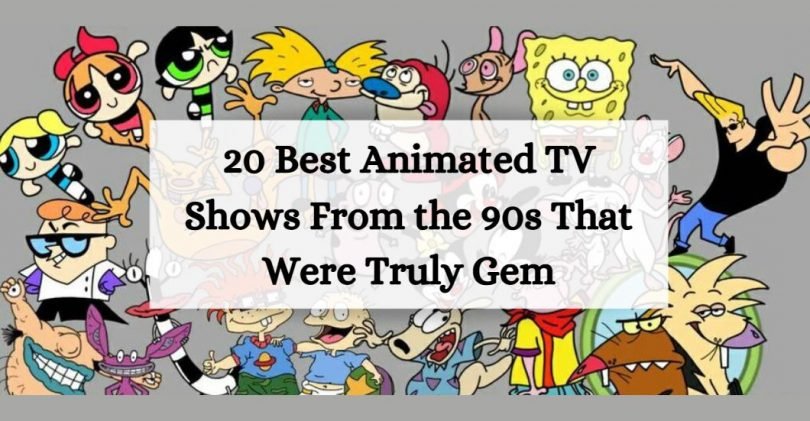 Television was the most popular form of entertainment for kids in the 1990s, and we spent our childhood days watching several of the best- animated TV shows. Each and every era has its fair share of fantastic cartoons, but still, the ones from the 1990s are a cut above the rest. So, in this article we have put together a list of some of the best and most popular animated television shows from the 1990s for you. These will help you recall memories that have been carefully kept in your memory.

Duck Tales is a popular and funny cartoon from the 1990s. Walt Disney Television Animation produced DuckTales, an animated television show. It’s the narrative of Donald Duck, who takes care of his nephews Huey, Dewey, and Louie. Because of his nephews, he gets sucked into a slew of adventures.

Batman, the most famous animated character, was everybody’s beloved. Critics and fans consider it as one of the most faithful renditions of the character due to its thematic intricacy, darkness, and visual quality. There have obviously been numerous variations of Batman and his different evil nemeses, some of which have been successful and others which have failed. Epic battle scenes, drama, and love triangles are all featured in this show. This series did a good job at portraying Batman’s life.

This was most likely the first TV show at the time to begin educating us all about feminism. Bubbles, Buttercup, and Blossom were adorable little girls who could transform into fearsome warriors when the situation called for it. It was so much joy to watch Blossom, Bubbles, and Buttercup on their adventures as they battled crime and saved the world from bad forces. The concept of three small girls saving the world was a brilliant one.

Tom and Jerry was a popular animated show among kids in the 1990s. All of Tom and Jerry’s brief episodes brought back lovely memories for us. The series involves a series of confrontations between Tom the cat and Jerry the mouse, who are natural enemies. Furthermore, their conflict was our primary source of entertainment.

It was another popular animated TV show amongst kids. Popeye, the sailor who gains strength by eating spinach, is well-known. Popeye finds himself in strange situations full of adventures in each episode. It was a TV show that made us want to eat spinach. Every child began to eat spinach in the hopes of gaining the strength to battle while watching this show.

Pokemon, a show that has become so popular that it almost doesn’t require an intro, debuted on television in 1997. Pokemon is a widely known 90s animated series that continues to be popular today. It introduced us to a fascinating world full of fascinating creatures. The series’ characters and storyline don’t go out of vogue. If you are a big fan of pokemon then you definitely knew about the List of All Pokemon Characters Of All-Time.

Recess is the story of six fourth-graders who are having a good time. The animated TV series follows a group of six fourth-graders on their adventures at recess in primary school, doing much more than just playing and roaming around aimlessly, and gave us big friendship objectives at a very early age. They each have their own individuality and go through the usual (and often not so typical) adventures that a 9-year-old should go through.

Johnny Bravo was the most handsome young man in the 1990s. Johnny Bravo, an Elvis-inspired teen guy with large blonde hair and a regular costume of black sunglasses, a tight-fitting black T-shirt to show his muscles, and blue jeans. He is a man who attempts to impress a woman but fails miserably. In addition, each episode in this show is full of humor and fun. His life’s ambition is to date a beautiful and smart woman. Johnny Bravo was undoubtedly able to convey the importance of loving and admiring oneself.

This animated mystery television show was a fan favourite for many years. Despite the fact that this cartoon series is rather ancient, the theme tune is still remembered. Scooby and the gang use their brains, as well as other investigative skills, to solve mysteries that seem to be supernatural at first but are invariably human-caused.

Dexter is a young genius who is beloved by many children in the 1990s. Dexter, a red-haired clever child with a secret laboratory wherein he gathers his inventions, is the protagonist of the series. Dexter and his sister Dee Dee are usually at odds. His only problem is that his older sister, Dee Dee, is bent on sabotaging his plans.

In 1996, the show Courage the Cowardly Dog first aired. Courage, the Cowardly Dog, is a pink-colored dog who is terrified of a variety of things. Courage had to put his concerns aside in every episode, confronting supernatural forces, demons, zombies, and other genuinely frightening creatures in order to protect his owners, who were frequently unaware of the danger lurking around the corner. An anthropomorphic dog who lives with an elderly couple is the subject of the series. He had a lot of supernatural or paranormal experiences. It’s a little frightening to think that our era has seen this comedy-horror series.

Tommy, Chuckie, Phil, Lil, and Angelica were the protagonists of the show. A show on how baby watches of the world produced some of the most relevant commentary on daily life on television. Rugrats, which aired from 1991 to 1993, was taken off the air for three years. Rugrats returned in 1996.

Steven Spielberg and Warner Bros. produced The Animaniacs, a funny animated series. It follows the adventures of three wacky characters: Yakko, Wakko, and Dot. But basically, this animated show taught us a lot about presidents and other famous people. In 1998, the show came to an end after 99 episodes and five seasons. And this animated show’s wonderful theme song is It’s Time for Animaniacs is not forgettable.

SpongeBob was a remarkable show, with a lot of humor which was enjoyable even for adults. For Nickelodeon, Stephen Hillenburg has created an animated series. Also, it’s one of the channel’s many award-winning shows. This is set in the fictional undersea city of Bikini Bottom. The main protagonists are underwater animals that live beneath the surface of the water. You have probably heard of SpongeBob, Patrick, and Squidward. Still, this show continues to live on in the way of memes and gifs.

Marc Brown, a children’s book author, produced the illustrated book series Arthur in the mid-1970s. Brown chose to turn his renowned book series into a children’s animated TV show in 1995. Arthur is a nostalgic series from childhood. And being a hilarious, meaningful story about growing up, the show subtly teaches kids about sharing, the worth of friendship, and diversity. He and his buddies also learn life lessons.

“TaleSpin” was a popular Disney Channel animated show from the early 1990s. TaleSpin is a Walt Disney Company animated show with anthropomorphized creatures as protagonists. All of Disney’s iconic characters, such as Louie the ape, Baloo the Bear, Sher Khan the Tiger, and others, made appearances in this series. There’s a love-hate relationship between Baloo and Rebecca.

The X-Men were extremely popular among children in the 1990s. In the group of X-Men who combat bad guys, there are humans, extraterrestrials, and mutants. That’s why so many youngsters from the 1990s are rewatching it now. Despite never fully deviating from its superhero actions, the animated series did not shy away from the comics’ political themes. They were colorful and interesting in every aspect.

Hey Arnold is a comedic show about a kid named Arnold who lived in a boarding house with his grandparents. The show follows him as he tries to establish his footing in a major city whilst facing the problems that he and his pals face. Moreover, the central story of this 1990s show revolves around Arnold’s urban living issues and how he resolves them.

One of the best kid’s cartoons of the 1990s was the animated Aladdin series. Aladdin lives in Agrabah and has adventures with Princess Jasmine, his pet monkey Abu, the magic carpet, Lago, the parrot, and his best friend, the Genie. Moreover, the series provided us with additional information on the fairy tale characters. This is a classic animated TV show that anyone of any age can enjoy.