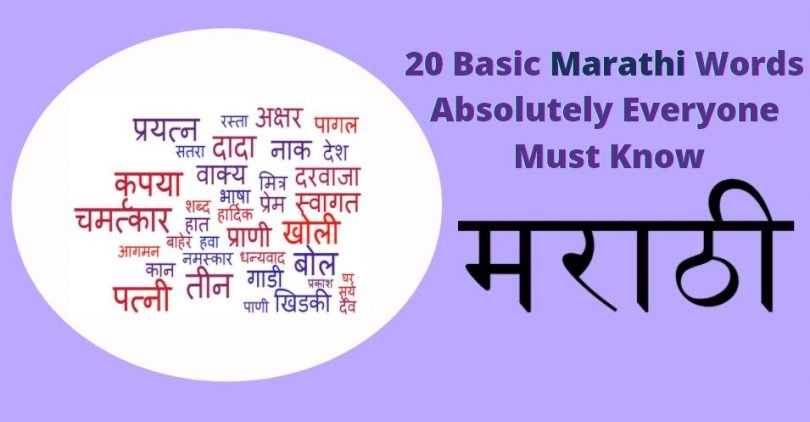 If you are planning to relocate to Maharashtra, you will undoubtedly have a difficult time in the beginning. Because relocating to a new location can be a major life shift. That’s because the vast majority of the residents are North Indians and, for the most part, communicate in Hindi or Marathi. So, here will provide you a list of 25 Marathi words to know so you can communicate with the locals.

Kasa aahes is a term that means “how are you?” When you are asking a question to an elderly man, you can say (Tumhi kase aahat)?

You can ask someone your age or a younger boy (Tu kasa aahes)?

If you are asking a girl your age or younger, you can say (Tu kashi aahes)?

When you asked someone, “How are you?” and they responded with the same question. You might now respond in English by saying “I’m fine,” But in Marathi you can say “Mi thik ahe.”

Ho is the term which is used to say “Yes”. Ho and nahi/nakko is the first marathi word that everyone must know at the beginning. Make sure not to confuse saying “Ho” not “No”.

In Marathi, the words (nahi) and (nakko) are used in negative phrases. It is the English counterpart of both of them. “Nakko”is used in imperative sentences that are negative in nature, such as requests, suggestions, advice, or commands.

Mitra is a marathi word which means “friend.” The phrase is best described as a buddy who shields you from danger, leads you down the right path, and provides you joy.

As a result, when it comes to describing relationships, marathi and English might be confused.

Kuthe means “where”. Suppose if you want to ask someone where you are?You can say tu kuthe aahes if he/she is younger or equal to you. If they are older than you then you can say tumhi kuthe aahat?

If your marathi friend comes to you then says “basa ” to sit on the sofa to help them to feel more comfortable rather than saying in english.

Another set of fundamental Marathi terms that will come in handy if you are late. Simply ask a friendly stranger named “Kiti Vajle” he/she will tell you the time.

In Marathi, the word thamba indicates STOP. Whenever anyone says “thamba”, he/she is telling you to stop doing something. When someone asks an elder, senior, or respected person to stop, they say “Thamba”.

This indicates that something is correct. We frequently react in English by saying, OK. On the other hand, it has a second meaning: united. Mi yete tuzya barobar. This implies that I will come with you.

This is probably the simplest of the Marathi words on this list, and you can use it in order to tell someone to go. Here there are two cases: if someone is older than you, you can say “Tumi ja” and if they are younger than you then you can say “Tu Ja”. This can be used to tell your friends to go to lunch because you are at a meeting.

Mala samajate means I understand. When your professor hands you your first task and asks if you have any questions, tell her you understand everything. You only need to say “Mala Samajate”.

Punha sanga means that you want someone to repeat what they said. If someone says something you don’t understand, don’t be afraid to ask them to repeat it. Simply say “Punha Sanga.”

If someone greets you with Susvagatam, it signifies they are wishing you a warm welcome. The best part is that you won’t have to respond in Marathi. A simple smile will suffice.

In Marathi, nav means “name.” This Marathi term should not be confused with the Hindi word for “boat(Nav).” So it will come in useful if someone asks you for yours. Alternatively, you might ask them for theirs.

Jevan in Marathi means “Food”. This Marathi term has a similar sound to the Hindi word Jeevan, which leads to life. Isn’t food, to be frank, the most important aspect of life? You can ask your colleagues or marathi friend “Tu jevan kela ka?” which means “Have you eaten?”.