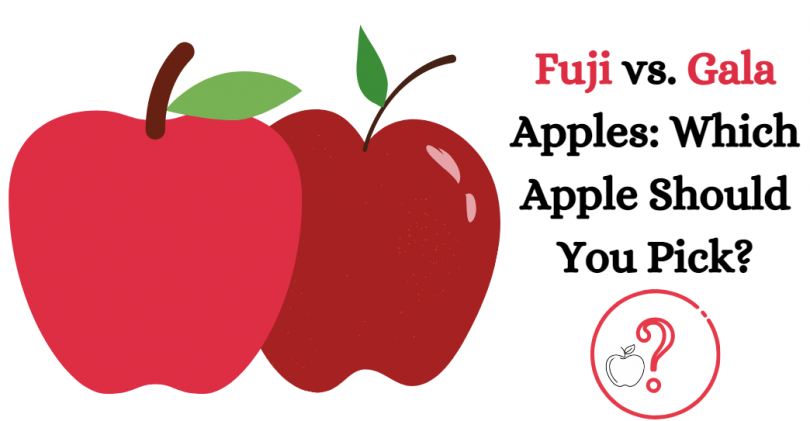 Apples are immensely popular all over the world, mostly because of their versatility and taste, and also because of their nutritional benefits and their availability throughout the year. Fuji and Gala, these two apples are highly common, and each one has its own distinct taste. Here we will learn about the distinctions between these two types of apples, as well as the characteristics that can be used to compare them, such as their appearance, taste, and availability along with what exactly is fuji apple and gala apple in deep from which you can easily able to choose which one should you pick. So, let’s take a look.

What Is Fuji Apple?

Fuji apples are firm, crisp, and juicy as well. Fuji is one of the most appealing apple varieties. The Fuji apple originated from Japan. It was made in the country in the early 1940s and released to the market in the early 1960s. It’s a cross between the Ralls Janet and the Red Delicious. They are best consumed fresh, but they also work well in baked goods. It has a pleasing yellow-green exterior with a beautiful pink flush. It was named after the Japanese city of Fujisaki.

Fuji apple has numerous health benefits. It controls blood pressure. Vitamins, antioxidants, citric acid, and malic acid are abundant in apples, which lead to improving blood circulation and prevent atherosclerosis. This lowers the risk of hypertension.  Also, the antioxidants in the Fuji apple reduce the risk of cataracts by about 10% to 15%.

Fuji apples are high in potassium, magnesium, calcium, copper, vitamin A, and vitamin C, all of which aid to improve hair germ cells and minimize hair loss. Procyanidin, a natural substance that promotes hair development, is also found in apples. As a result, consuming Fuji apples on a daily basis is an excellent strategy to slow down the progression of hair loss.

Fuji apples are high in vitamin C and vitamin A, which help to slow down the aging process by increasing collagen production. All vitamins work together to prevent the creation of free radicals, which cause wrinkles, dead skin cells, and black spots on the skin.

It helps to resolve respiratory issues. Respiratory disorders are common and can present themselves in various ways. After just very few days of treatment, several conditions will noticeably improve. Several disorders, on the other hand, are chronic, persist a long time, and can return. The apple has a strong anti-inflammatory composition, making it ideal for treating respiratory disorders.

Side Effect Of Fuji Apple

What Is Gala Apple?

Gala is a common variety in the United States. Gala Apples originated in New Zealand. This apple is a cross between Kidd’s Orange Red and Golden Delicious. Gala apples were developed in the 1930s and produced in 1934 in New Zealand. Gala apples are a crisp sweet apple with a mild flavor that is widely used in applesauce, salads, and as a snack. This is a great snack to have on hand when you’re on the go.

The nutrient composition of most apples is identical. A huge Gala apple has a plethora of health benefits. A large Gala apple has roughly 10 milligrammes of vitamin C, a nutrient that boosts your immune system and helps you build collagen for good skin and wound healing. Vitamin C also has antioxidant properties, it protects the body from free radical damage, which can cause cancer and heart disease.

Fiber is found in little more than 5g in a large Gala apple. Fiber-rich meals might help you manage your appetite by making you feel fuller for longer. Fiber helps to regulate digestion and maintain healthy cholesterol and blood sugar levels in the body.

Gala apples have the challenge of having varied textures at different stages. It has a great crisp taste when eaten fresh and in season. If they are not in season, though, they turn floury and soft.

Now that we have learned the basics of Fuji and Gala Apple, let’s compare them. We can compare the two based on a number of aspects; let’s go over each one.

It may be the most straightforward approach to distinguish between the two. The Gala Apple is yellow and orange shades, with stripes that span from top to bottom. These stripes are pink, and the shade of pink varies according to the Apple’s maturity.

Gala apples are 55mm while Fuji apples are 75mm. By looking at the size difference, you can identify which one is gala or fuji apple.

The flesh of the Fuji apple is dense and crisp. The taste is citrusy and reminiscent of green apples. It has a slight acidity to it. Gala is identical, but not quite as juicy or citrusy. Gala, on the other hand, has a more floral aroma. Allowing the gala to ripen enhances its sweetness.

The nutritional content of each variety of apple might be extremely important to the people who adore apples. Apples contain a wide range of vitamins, including vitamin A, C, and B. They also have pectin, a soluble fiber that may help to decrease cholesterol levels.

Fuji apples have higher vitamin C than gala apples because they are more citrusy. Calcium and iron are among the minerals found in them. Gala apples have a higher calorie content per serving but a lower sugar content.

Fuji apples are grown in Fujisaki, Japan. Gala apples are more adaptable than other varieties. Fuji can only be found in China, Japan, and the United States, whereas Gala may be found nearly anywhere on the globe. This variety of fruit adapts to its environment and can be found almost anywhere.

Fuji is ideal for both raw and cooked dishes. You may add it to a fresh coleslaw by squeezing it in juices. A Fuji Apple has a unique flavor combination that allows you to do a lot with it. These ingredients are as popular among chefs as a fine pair of tomatoes.

Salads, particularly green ones, work well with Gala apples. It goes well with freshly cut herbs and most types of greens due to its texture, taste, and functionality. They are fantastic in apple crumble, apple sauce, and a variety of other dishes that call for soft apples. When gala apples are very ripe, several people consider them to be the perfect ingredient, much like when very ripe tomatoes are used to make homemade tomato sauce.

Fuji apples are always accessible in the market, regardless of the season, although they are most plentiful in the fall and winter. If it comes to availability, Gala apples aren’t much different. They are available all year as they’re a fruit that grows in both the southern and northern hemispheres.