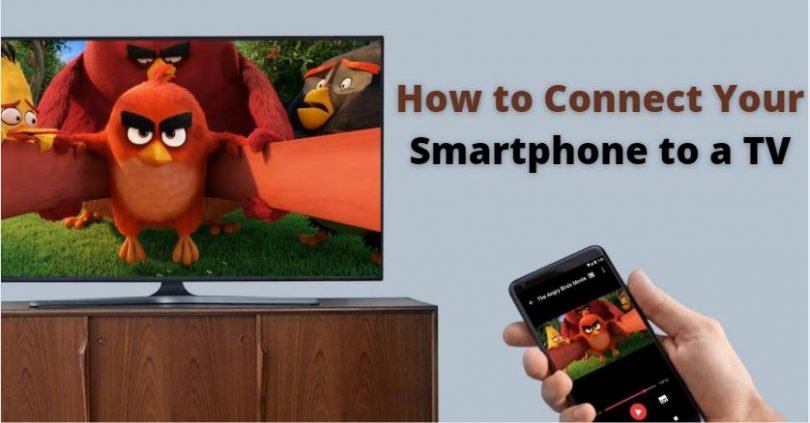 It’s not always the best idea to watch movies, videos, etc that you have saved on your phone, on a small screen, especially when you’re watching with a group of people. And the truth is that watching movies, videos, photos on a large screen is fun to watch and comfortable. Whether you have a smart TV or not, you can connect your smartphone to a TV.

It is a really wonderful way of watching movies, videos, music, games, TV shows, and many more by connecting your smartphone to a TV. Isn’t it? Based on if you have had an Android or an iOS, and whether you have a Smart TV or a standard HDTV, the method may vary a bit. So, today we will discuss how you can connect your smartphone to a TV wired or wirelessly.

Connect Your Smartphone to Tv With Screen Mirroring

Screen mirroring is a way of connecting your smartphone to your television that works with apps that don’t support casting methods. Depending on your phone model, the steps to connect a smartphone to a TV may differ.

To find the cast button all you have to do is just swipe down the setting menu shade and you can see the cast button. Now just click the cast icon and then you will be able to share your screen with the TV.

If it doesn’t work with your phone model just open the play store and then download the Google Home application. After downloading the Google Home application you need to open the account, tap on the mirror device and then cast screen or audio. Lastly, stream your phone’s screen to TV.  The videos or images are wirelessly transmitted from the phone to the television. This wireless method is simple, it has one drawback that is both two devices should be connected to the very same wi-fi network.

Connect to the TV with Chromecast

The Google Chromecast streaming device is likely the least expensive and most simple way to connect your smartphone to your TV without making use of HDMI. Compatibility with both Android and iOS devices is another great feature of Chromecast.

The setup of a Chromecast is simple. You will use this to stream audio or video for a single app or to mirror your whole Android device. Many smart TVs now have Chromecast built-in, so you won’t have to pay extra. Make sure that your device and Chromecast/smart TV are connected to the same Wi-Fi network. On your phone’s supported apps, such as Netflix, YouTube, Hulu, Amazon Prime Video, and Google Photos, an icon will display automatically.

Connect to the TV With Apple AirPlay

Apple AirPlay is the simplest method of connecting an iPhone to a TV. Apple has begun to support AirPlay on a variety of streaming devices and TVs from manufacturers such as Sony, Samsung, Roku, Vizio, and others.

To use Apple AirPlay, first make sure that both devices are connected to the same wi-fi network, then swipe up to open the Control Center and select the screen mirroring option. Now select your TV from your WiFi network’s list of AirPlay devices.

Connect Smartphone to TV With an Adapter or Cable

This is the simplest method for transferring files to the television. A USB port is found on almost all smart TVs. You can connect your smartphone and transfer all of your files, data, videos, and other media. There’s no need to connect through wi-fi. Pull down the notifications bar after plugging in your device to enable File Transfer mode.

The most reliable way to connect your phone to your TV is with an HDMI cable. The small end of the cable should be plugged into the device’s HDMI port, while the large end should be plugged into the TV’s standard HDMI port. You must keep it physically connected and hold it the entire time when you are using it. Most smart TVs have an HDMI port that can be used to transfer video and audio files from a specific source. You’ll need an adapter to connect your phone to your TV if it doesn’t have an HDMI port.

Digital Living Network Alliance (DLNA) is an acronym for Digital Living Network Alliance. It is a great way to connect your Smart TV to your smartphone. You will need to use an internet connection to link your phone to your TV. If you’ve had a smart TV, it is likely that it will support DLNA. Data from other devices, such as a tablet or a laptop, can also be streamed using this method. Also, a few other Android apps, such as LocalCasts and AllCast, make it possible to connect your TV to many other devices.

The most common method is to use a wireless connection. All of the methods listed above are relatively simple to set up, you can choose between wired and wireless options. If you haven’t tried this method yet, now is the time to do so.