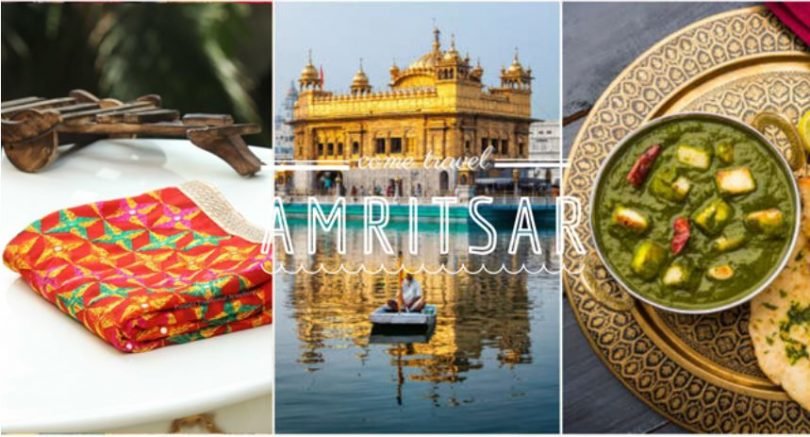 Take a trip to the Punjab state of India and explore this vibrant city in the northwest corner of India. Amritsar is one of India’s most religious cities. It’s among the largest cities in India and is home to several important Sikh spiritual sites that attract a huge number of pilgrims annually. Also, this historical city contains a variety of museums, parks, markets, and restaurants offering amazing food.

While visiting the golden city of Punjab, you’ll have many mesmerizing experiences that you will be enthralled with this city. You can visit the Wagah border which is merely 28 km away and watch the daily Wagah Border Ceremony. Also, dig into incredibly tasty and famous food of Punjab, wander around places like Golden temple, Heritage Street, Jallianwala Bagh, tour Summer Palace and have fun in Sadda Pind. Moreover, Amritsar is a wonderful place to shop for Indian textiles.

By road, rail, and air, Amritsar is well connected.

Being located on National Highway 1, Amritsar is well connected by GT road to numerous major cities. To roam within the city, you can take rickshaws, auto rickshaws, buses or you can book a cab. You can also wander around the city on a metro bus.

Located around 11 km away from the city center, the Sri Guru Ram Das Jee International Airport makes it possible for all to get regular flights all throughout the day.

Amritsar railway station is well linked to many cities in Punjab along with numerous other cities in India.

This place is named as Golden Temple as the sanctum present at the center is covered with gold foil. It is also known as Sri Darbar Sahib, which means “sacred audience“, or Sri Harmandir Sahib, the temple of God. It is Sikhism’s most important shrine. There is nothing quite like wandering around Darbar Sahib and sitting down for a meal from the massive volunteer-run kitchen.

The architectural structure of the Sri Harmandir Sahib was designed by Guru Arjan Sahib, the Fifth Sikh Guru, who conceived of the idea of constructing a centralized place of worship for Sikhs. The shiny inner sanctum of the temple with sparkling golden walls and sophisticated design is an absolutely mesmerizing view to look at. Standing tall in the center of a massive pool, Sarovar or Amrit Sagar often seems as if it’s floating on the water. Its ceiling was created with gold and precious stones. Maharaja Ranjit Singh, in 1830, lined it with gold. This took 162 kg of gold. The entrance to this location is via a set of steps that lead down. It’s made this way to represent a simple way of life. This scene is truly breathtaking, and it has the ability to make an indelible impression on the mind. It is troublesome to elucídate its beauty in words. It’s a matter of experience rather than a description.

Jallianwala Bagh holds an outstanding place in the history of India’s independence. It’s the place whose history can give goosebumps to anyone. This is the place where many people were killed in the Jallianwala Bagh massacre on 13 April 1919, led by British Brigadier-General R. E. H. Dyer. On that day, dozens of people had come together for a peaceful gathering. General Dyer ordered the British army to encircle the location and fire upon it. Soldiers were given the order to shoot till they ran out of ammunition. There was no place to escape. Everyone inside that place was at the mercy of the British army. When the firing started, many people jumped into the well, present in the middle, to escape the shooting. Hundreds of people died from other people stomping on them. There are still bullet marks present on the walls around this place which is proof of this cruelty. It is a memorial that represents the brutality of General Dyer and of the sacrifice that the people made for the freedom of India.

However, Britain never formerly apologized for this incident of mass murder, though, expressed “regret” in 2019.

Visit this Fort to relish together with your family and friends in the open lush green area inside the fort.

Located in the heart of Amritsar, this magnificent heritage site has a fascinating history that spans more than two centuries, from the time of the Bhangi Misl to Maharaja Ranjit Singh’s reign, from the East India Company (Britishers) to the Indian Army, to when it finally opened its doors to the general public on February 10, 2017. This fort is now developed as a museum and theme park, in the image of the history of Punjab.

Qila Gobindgarh represents the fascinating history of Amritsar and offers insights into the events that have shaped this place into what it is today. People can watch the 7D show and laser show that portrays the history of this fort and makes you feel like a part of it. It is really an eye-opening experience. In addition to that, you’ll see:

an amazing show on Maharaja Ranjit Singh representing his bravery and showing what a greater ruler he was.

A laser show which immerses you in the legend of Gobindgarh Fort where these seemingly mute walls, have a story to tell of what it has heard in the past.

Qila Gobindgarh has a highly complex and sophisticated structure. In its layout, construction, material, and the philosophy underlying its structure, it portrays the martial spirit of Punjab. There are many points of architectural interest in the Qila. Some of them are the gates, moats, colonial bungalows, darbar hall, Khas mahal, 4 Bastions, Toshakhana, etc.

The Turban Museum represents various forms of the pagris.

An exhibition that shows the essence of great warriors and saints of Punjab.

Durgiana Mandir is a Hindu temple in Amritsar. Even though it’s a Hindu temple, its architecture is identical to the Sikh Gurudwara Sri Harmandir Sahib. The name of this temple is derived from Hindu Goddess Durga.

A sense of peace and tranquility welcomes guests to the spectacular Temple. There are various reasons which bring hundreds of visitors to pay a visit to Durgiana Temple. Here, they not only get a chance to hear the sacred hymns but also get to see the magnificent architecture of this holy place.

The Wagah Border separates the two countries of India and Pakistan. Sometimes it is also known as Atari Border. The elegance of the Beating Retreat and the Change of Guard within handshaking distance of the Indian and Pakistani army officers makes for a most pleasant view. The soldiers from both countries march, going through the steps of bringing down their respective national flags to start the Flag Lowering Ceremony which has been a daily military practice from the year 1959.

It is fascinating to watch the ceremony. People can watch it from both countries. There are huge crowds on both sides supporting their “teams” and cheering for them.

While just 45-minutes long, the whole ceremony gives people many cheerful memories for hours of storytelling back at home.

This Partition Museum is the first-ever museum to be dedicated to the stories and trauma of millions of people who had to endure agony and suffer from the consequences of the cruel partition between India and Pakistan. It is situated at Town Hall in Amritsar.

The exhibits at the Partition Museum features a haunting assortment of newspaper clippings, antique photographs as well as personal items that were donated by the people who had experienced the terror and lived throughout the partition and the resettling of refugees after the event.This location will provide you with a better understanding of India’s and Pakistan’s rivalry. People can write a message on a green leaf and put it on the Tree of Hope as they exit the museum.

This area is lush green with numerous trees. This place is peaceful and an amazing spot for morning and evening walks. The Maharaja Ranjit Singh Museum is located here, and it houses Mughal weapons, antique coins, and warriors’ costumes from the early nineteenth-century reign. On its grounds, the Panorama depicts 200 years of the Sikh empire through artworks and models of the king’s life. The serene RamBagh Gardens is an excellent spot for strolls. This place is worth spending time exploring.